Following Governor Jerry Brown’s announcement of mandatory water restrictions on Thursday, April 1 the agriculture industry has been scrutinized and called into question for the levels of water used for the California agricultural industry. In a recent Washington Post article, the agriculture industry is branded for being responsible for upwards of 80 percent of California’s water use. This staggering and inflated statistic has been the source of questions regarding agriculture water efficiency and use. However, the California Department of Water Resources released a report detailing that when factoring in environmental needs of California, the agriculture industry does not use 80 percent but rather uses 40.9 percent of water allocation. The leading source in receiving water for California is the environment with 50.2 percent of California water allocation totaling nearly 40-million acre-feet. This allotment of water is used in wetland management as well as to meet Delta, stream and river flows.  Executive Director of the California Water Alliance, Aubrey Bettencourt said, “In an effort to demonize hardworking farmers and portray the environment as neglected, activists are waging a propaganda campaign that perpetuates the grossly misleading and disingenuous claim that farmers are hoarding 80 percent of the state’s water supply. That is simply not true.” 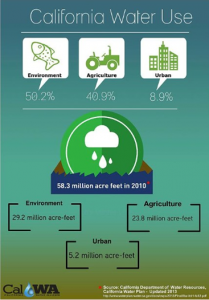