On June 17, 2021, the California Occupational Safety and Health Standards Board readopts revisions to the COVID-19 Prevention Emergency Temporary Standards (ETS) and by executive order signed by the Governor, these revisions are effective immediately.  Some of the revisions include:

There are requirements that remain in place from the November 2020 ETS, those are:

In regards to vaccination status, the Equal Employment Opportunity Commission (EEOC) laws do not prevent an employer from requiring all employees physically entering the workplace to be vaccinated for COVID-19, so long as employers comply with the reasonable accommodation provisions of the ADA and Title VII of the Civil Rights Act of 1964 and other EEO considerations.  Other laws, not in EEOC’s jurisdiction, may place additional restrictions on employers.  From an EEO perspective, employers should keep in mind that because some individuals or demographic groups may face greater barriers to receiving a COVID-19 vaccination than others, some employees may be more likely to be negatively impacted by a vaccination requirement.

To assist our members, we will be providing updates to the COVID-19 Prevention Plans.

This is an urgent advisory to be on the lookout for people trespassing on to farms in the towns of Raisin City, Cantua Creek and Caruthers during or immediately after pesticide applications.  Participants of a study by the Central California Environmental Justice Network are being paid to carry backpacks with air monitoring equipment in these locations from May through August.  We are concerned these activists may attempt to enter a field or orchard during a pesticide application or immediately thereafter in order to make sure they get a “detect” on their air monitoring equipment.  This effort is led by the Central California Environmental Justice Network.  For years, the California Department of Pesticide Regulation (CDPR) has been conducting community air monitoring, and there been very few detections of pesticides, and none that exceeded any risk levels of actual concern.   Frustrated with the lack of evidence, the environmental justice community is resorting to using unproven and unapproved methods and equipment to attempt to demonstrate pesticides are impacting residents in these communities.  Considering these activists are getting paid to prove detections, we are concerned with just how far these activists will go to attempt to prove pesticide exposures.  Should you see anyone in or around the edge of your field or orchard, we urge you to immediately contact the County Sherriff’s office and the county ag commissioner.  We have already warned the Sherriff and the Ag Commissioner of this potential threat. 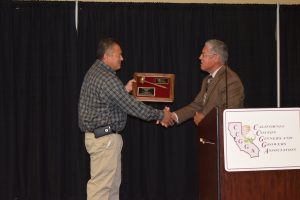 Yesterday, the California Cotton Ginners and Growers held their 2021 Annual Meeting at the Tulare Agri-Center.  With COVID-19 restrictions easing for in person meetings, the Association was happy to host and update the membership on various issues surrounding the industry.  Breakout rooms were organized, and attendees heard updates on topics currently impacting both the growing and ginning industries.  Attendees reconvened in the afternoon to hear cotton marketplace forecast from Leigh Pell with the Western Cotton Shippers Association, and were provided an update on the National Farm Policy Outlook from Tas Smith with the National Cotton Council.  Association staff then updated the membership on various efforts on both State and Federal rules and regulations.
After Association staff made their presentation, Chairman Bryan Bone took time to recognize Tom Gaffney for his commitment to the association as past Chairman.  Todd Fitchette with Western Farm Press made a presentation, and provided the 2021 High Cotton Award to Hansen Ranches for their ongoing efforts to improve growing practices and commitment to the cotton industry.  Attendees heard an informative presentation from Dan Walters with CalMatters on the political climate within the State of California.  The Association would like to recognize thank all of our Annual Meeting sponsors, especially PhytoGen and Samuel Strapping for their 5 Bale sponsorship this year.   With COVID restrictions easing, the Association looks forward to hosting the event again next year. 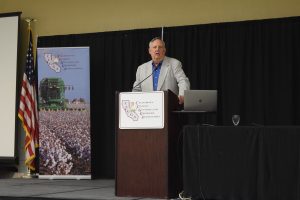 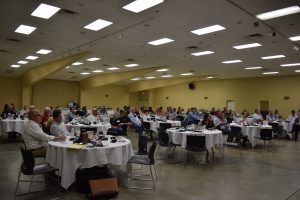 The May Revise to the Governor’s proposed budget has been released and there is good news and bad news.  On the good news side, there is money for things like air quality incentives, water and environmental upgrades.  The bad news…there is not enough of it to meet this state’s own unrealistic mandates.  And there is money to fund more anti-farming activism through pesticide notification activities, something that this administration has as a priority.

The funding for the FARMER program which funds the replacement of old Tier 0, 1, and 2 tractors could not have come at a more important time.  The deadline to achieve 11 tons per day of NOx emissions is less than two years away.  The Governor is proposing $363 million over two years.  Without this incentive money, agriculture in the San Joaquin Valley would be faced with a mandatory tractor replacement regulation much like the state’s Truck Regulation.  However, the money is still less than the California Air Resources Board’s own call for $193 million for four years to meet the mandate.  The Governor also proposed $150 million towards solving the agricultural burn elimination issue in the San Joaquin Valley, but this is much less than the estimated $290 million agriculture believes it will take to end the practice.

On the water front, the Governor is proposing a $5.1 billion investment, over four years, to align with his July 2020 Water Resilience Portfolio. The package includes:

Lastly the May Revision proposes $10 million one-time General Fund to implement a statewide infrastructure network to provide access to information about local pesticide use. The Department of Pesticide Regulation will be launching a process this summer to develop and adopt the statewide regulations necessary for advanced public notification of certain pesticide applications.   Coupled with the massive increase in the pesticide mill tax, it is clear this administration is targeting pesticide use in California.

This year, the California Cotton Ginners and Growers Association invites you to join us at Lemoore Municipal Golf Course on May 11th for a PAC Fundraiser Golf Tournament.  The tournament is being held the day before CCGGA’s Annual Meeting at the International Agri-Center in Tulare on May 12th.  Registration for the golf tournament is $100 per player.  Registration includes practice balls on the range, green fees and cart, as well as a tri tip sandwich lunch.  Registration for the event starts at 8 am, with the shotgun start at 9 am.  Payment for the event must be made via check.  If you wish to donate to the Association’s Federal PAC, we ask that you provide a personal check.  Due to Federal PAC donations requirements, contributions for Federal PACs cannot be made via company check.  Please find the tournament notice and registration page below.  If you have any questions, please feel free to reach out to Chris McGlothlin at chris@ccgga.org, or by phone (559) 547-0288.

Hot Topics: Drilling Down on COVID-Related Best Practices: Dealing with Leaves of Absences, Wage and Hour Traps and Employees Gaming the System

Today, the California Department of Water Resources (DWR) announced the funding recommendation to fully award the available $26 million of Proposition 68 grant funding to 6 awardees. This money is from the Sustainable Groundwater Management (SGM) Grant Program Implementation Round 1 and goes toward projects that will help support Critically Overdrafted (COD) Basins.  The six projects awarded are as follows:

Robert Gary “Skeet” Trapnell, 79, died March 15, 2021 at Cedar Plantation in Metter, Georgia, from complications of Alzheimer ‘s disease.  Skeet was a graduate of Metter High School, The Georgia Institute of Technology, and The Naval Post Graduate School in Monterey, California. Upon graduation from Georgia Tech in 1963, he enlisted in the United States Navy, where he proudly served as a naval aviator for 20 years, flying combat during the Vietnam War.  After retirement from the Navy, he settled in Lemoore, California, where he became involved in farming and agri-business. He was employed by Harris Farms as the cotton gin manager, one of the corporate pilots, and co-manager of the crop dusting operation, a company in which he later became a partner and expanded the scope to include a custom farming operation. He was instrumental in the design and construction of the Harris-Woolf almond processing plant and briefly managed that facility as well.  Skeet was one of the earliest growers of pistachios in Kings County, California, developing his own orchard shortly before his retirement from the Navy. As with anything he attempted, he established a first class operation, and prospective new growers often sought his advice, which he freely and enthusiastically gave.  He was called out of retirement from “public work”, as he called it, two additional times to help develop a concrete crushing operation for his friend Dave Bush, of Dave Bush Construction and by former employer John Harris to assist in the establishment of an organic garlic processing plant.

Active in civic affairs, Skeet was a member of the Kings County Planning Commission, serving as chairman for two terms. He was a member and chairman of the Clark’s Fork Water Conservation District, and a member of the San Joaquin Valley Air Pollution Advisory Committee.   Although Skeet often said he would die with his boots on in his beloved orchard, the pull of home became stronger, and he and his wife Jan decided to sell their California holdings in 2017 and retire in their hometown of Metter, Georgia.

Responding to the Association, State Insurance Commissioner Ricardo Lara has issued an information request from all commercial insurance carriers operating in California on the availability and cost of commercial insurance for business operating in California.  This follows meetings in Sacramento and in our office on the issue with Commissioner Lara, where the Association reported on the overwhelming lack of commercial insurance following the devastating wildfires in the state, and the cost of insurance that is available.  The Commissioner has given insurance companies 60 days to respond to the request with a deadline of June 14th, 2021.  While this is no guarantee our issue is going to be resolved this year, at least the Commissioner is following through on his promise to investigate the issue and put serious pressure on the insurance industry to not penalize those of us who have nothing to do with the wildfires.  Stay tuned for more details as the investigation continues.

The California Cotton Ginners and Growers Association (CCGGA) is announcing the 2021 CCGGA Annual Meeting to be held on Wednesday, May 12th at the International Agri-Center located at 4500 S. Laspina in Tulare, California.  Registration packets will be going out to all regular and associate members this week.  There is an information packed agenda that begins at 7:30 with registration and ends following lunch.  The featured speaker will be Dan Walters from CalMatters.    Walters has been a journalist for nearly 60 years, spending all but a few of those years working for California newspapers, and has written more than 9,000 columns for the Sacramento Union and the Sacramento Bee and continues his column for CalMatters, a non-profit journalistic organization which distributes to dozens of California news outlets.  He has written about California and its politics for a number of other publications, including the Wall Street Journal. He is also an author and contributor, two books of which are, “The Third House: Lobbyists, Power and Money in Sacramento” and “The New California: Facing the 21st Century”.

Association staff has met with Agri-Center staff and COVID safety protocols will be in place for now including mask requirements and social distancing.  You can click on the respective links to access the Tentative Agenda and Registration Form.  Attendance is free, but you must be registered!