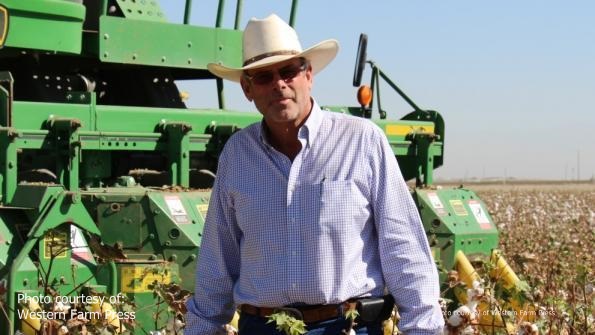 Longtime industry advocate Mark Watte passed away this past weekend after a valiant battle with cancer.  Watte was a tireless, passionate and unselfish voice for all of agriculture.
Association President/CEO Roger Isom stated “the California agricultural industry is grieving this week.  We have lost one of our true champions.  Mark’s rise to the Chairmanship of Cotton Incorporated was symbolic of his enduring drive to promote cotton and all of agriculture as the best in the world.  His courageous bout with cancer was emblematic of his toughness and can do attitude no matter the circumstances.  Mark Watte inspired all of us to get up, get involved and speak our minds.  While we mourn his passing, I can assure you that Mark is chastising us right now to pick up the flag and get back to it.  Get back to promoting, supporting and fighting for the greatest agricultural land in the world”.

Past Association President/CEO Earl P. Williams, who knew Watte well, said “The industry has lost an outstanding leader and all that knew him have lost a real and true friend.  The industry is better off having had his inspirational and “cut to the chase” leadership.  A wonderful person and proud to say I had the honor of his friendship.”

Watte was a partner in George Watte & Sons, a 3,000-acre diversified farming operation in Tulare, California, including cotton, alfalfa, corn silage, black-eyed peas, pistachios and a 1,000 jersey cow dairy.  Watte graduated from Cal Poly San Luis Obispo with a degree in Agricultural Business in 1974.  He then distinguished himself as one of the true leaders within the California agricultural community and the U.S. cotton industry.   Watte demonstrated his leadership through participation in several organizations, including the Consolidated Peoples Ditch Co; the Friant Water Authority; the Tulare Board of Public Utilities; and the Kaweah Delta Water Conservation District, on which he served as Vice Chair, and Past Chairman of the World Ag Expo.  He was also an advisor to the California Cotton Growers Association and most recently became Chairman of the Cotton Incorporated, a national organization conducting research and tasked with the worldwide promotion of US cotton.  Over the course of his career Watte has received numerous recognitions, including:  the 2000 Tulare Farmer of the Year (an award shared with his brother and business partner, Brian Watte); 2013 Tulare Man of the Year; Tulare County Agriculturist of the Year; and is a recipient of the 2015 High Cotton Award, presented by Delta Farm Press.

Funeral Services will be at 10:30 am this Thursday, June 23rd at the St. Aloysius Catholic Church in Tulare followed by the burial at North Tulare Cemetery, then a reception afterwards at the International Agri-center, Heritage Complex.   Donations, in lieu of flowers, can be made to the Watte/Griesbach Memorial Fund, 627 Beatrice Dr., Tulare; or the Tulare Hospital Foundation in Tulare.