It is with deep sadness that the Association announces the passing of longtime cotton industry legend Larry Gallian, who passed away on July 1th at the age of 75.  Larry was born in 1943 in Lawrenceburg, Tennessee.  He moved to California when he was 4 years old.  He graduated from Redwood High School in 1961 where he played basketball and baseball.  He started his “cotton career” in 1964 driving a spreader truck for Visalia Co-op Gin.  He became the assistant manager of the gin and in 1983 became the manager of operations, where he served until 2006 when Visalia Coop Gin closed its doors.  He then became a Pest Control Advisor for Nutrien in 2007 until his passing.  Larry served on the Board of Directors for the California Cotton Ginners Association from 1985 until 2007, and was the Chairman of the Board in 1990-1991.  Larry was honored with the Association’s Distinguished Service Award in 2006 for his commitment to the Association and the entire cotton industry.  He was heavily involved in the activities of the Association and served at different times on the Executive, Legal and Legislative, Annual Meeting, Joint Steering, Energy, Gin Waste Utilization and Political Action Committees.  Larry is survived by his wife of 55 years, Paulette, and his two daughters Niki and Traci, as well as his two brothers Terry and Gary, along with numerous nieces and nephews.  In lieu of flowers the family requests that all memorial contributions be made to the City of Woodlake Parks and Recreation Department to support Larry’s love for youth sports.  Donations may be dropped offed or mailed to:  City of Woodlake, 350 N. Valencia Blvd., Woodlake, CA  93286.  A celebration of life will be held on Sunday August 4th. From 12-4 pm at the Visalia Elks Lodge located at 3100 W. Main St in Visalia, California. 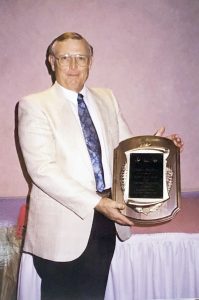